(Idioma en este post cambiado para obtener mayor cobertura,jeje ;)) I usually write about plants on this blog but I think that it’s important for me to write about this issue, since it may be useful for some people.
–
Bear in mind, that this review is not intended for the normal home user (I have no doubt about there being better choices for them) but for the scientist looking for an operating system solution for computational power, easiness or breathing new life into old machines.
–
Recently I discovered a new linux distribution which, in a simple choice of words, dazzled me. Unlike other distributions I had tried in the past, this one gave me the absolute freedom to do everything in an intuitive, performance enhancing, simple way. The distribution I’m talking about is Gentoo linux.
–
The great thing about this distribution is that it allows an amazing degree of customization and it allows the implementation of new applications from source in an incredibly simple way. Picture this. In my university, the implementation of gamess (a GNU quantum chemistry program) is a complete hazzle on the computers that have debian installed. Gamess must be implemented from source, and the compiling, building and configuration is filled with different tricks and things that must be done in order for it to work.
–
In Gentoo linux, it was for me as easy as typing “emerge gamess” on a commando prompt. Dependencies were searched for and compiled automatically using portage (Gentoo’s incredible unique system that installs programs from source, compiled on your system for your system by your system). And on top of that, I had an amazing 10% faster system than when I had debian. This, because of all the added features that I could implement using gcc flags.
–
In conclusion you end up with a beautiful system, with everything you need, as you need it, how you need it, as fast as you need it to be. With a desktop or no desktop with office or no office, with quantum chemistry packages or simulation software for magnetic phenomena, Gentoo seems to be the ultimate distribution for the scientist.
– 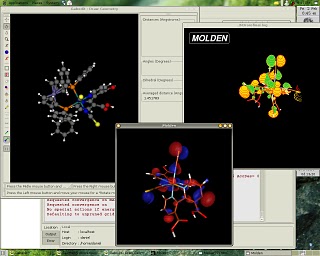 Above, my Gentoo linux desktop, displaying some graphical representations of molecules I’m currently working on.

Una respuesta a “Linux for scientists”